When Future Voices International was first invited to run a new media and digital communication workshop in a rural village deep in a Peruvian farming community, I knew it was going to be a tough challenge. Little did I know how remote this village was and the near to no existence of accessible technology here in the community.

I knew from the beginning that the project will need to be re-worked and adapted to suit such a situation where the sustainability of the project will be affected due to the lack of internet and access to computers. The main part of the project is young people with stories they wish to share with the world, something this village defiantly had by the bucket load. Future Voices Internationals mission is to share these with the world and get the stories of this community heard by as many people as possible.

The main focus the young participants of the project wanted to explore during out workshop sessions was on how farming life differs from any other. The majority of the kids know what city life is like as they spend the academic part of the year in cities across Peru but always return back here in the vacation periods to help family on the fields. After many discussion and planning session the young participants came up with the title: Mi Vida en Chacra (My life on the farm) 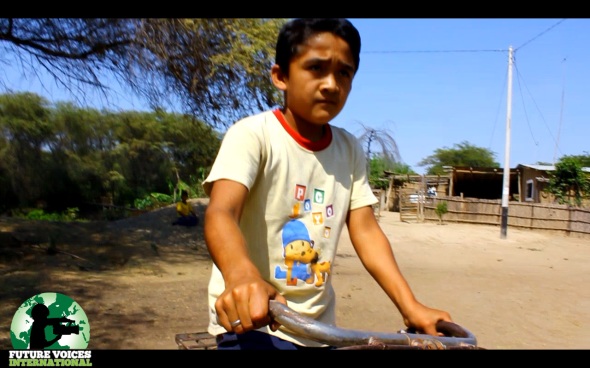 We decided to use 12 year old Jhon Silves Anderson as the main leading role, and through his character the film took place. The project took place at various times through the 12 days to represent all parts of the day to get an accurate representation of the life for a young person living on a Peruvian farm. project was created by six young individuals living in the local farming community, pictured in the first image of this post.

Another ultra short film called ‘Ardilla’ was shot by 13 year old Jemman Alexis Montalean Diaz, the short film was shot during a hunting squirrels session with the family. The film defiantly push’s boundary’s and clearly highlights the differences between life in here in the country and the city.

The project was successful and a press release has been sent to the local Lambeyeque newspapers to help spread the hard work the young people have invested into their masterpieces. The training provided was tailored to the age group of participants and the access to communication media. The finished project work will be featured during the first ever film festival taking place in Pachacutec on Friday 18th February 2011. If unfortunately you are unable to attend in person, then you can still take part in this film festival as all films will be available to view in our online catalogue.

This entry was posted on January 18, 2011 by futurevoices. It was filed under Future Voices International .